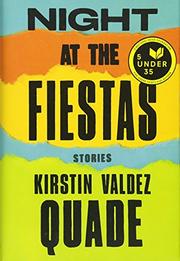 NIGHT AT THE FIESTAS

Debut collection of stories set in New Mexico from an award-winning writer.

Family ties—and family fissures—play a significant role in each piece. Catholic faith and practice are also prominent. In “The Five Wounds,” a perennially unemployed and generally defeated man prepares to play the role of Jesus in a Passion play while trying to deal with his pregnant teenage daughter. Although the symbolic resonances are heavy, Quade’s plainspoken style and mordant sense of humor save the story from bathos: “Thirty-three years old, the same as Our Lord, but Amadeo is not a man with ambition. Even his mother will tell you that.” Indeed, many of these stories illuminate a world in which religious belief gives shape to everyday reality. “Ordinary Sins”—previously published in The New Yorker—features another unwed, expectant mother negotiating a religious world in which women have no authority. Corpus Christi celebrations provide a climactic turning point in “Nemecia,” the strongest story in the collection and the one that gained entry into Best American Short Stories 2013. Quade offers readers a door into worlds that are likely unfamiliar, and she gives them the gift of letting them find their own ways. She doesn’t bother to describe, for example, the society of flagellants that has existed in New Mexico—just beneath the official notice of the church—for centuries, nor does she explain the different worldviews and doctrinal positions of an American priest and his more conservative African colleague. But while she grounds her stories in a specific cultural setting, Quade offers visions of family that have universal resonance. In “Mojave Rats,” a young mother is outsmarted and overwhelmed by her 7-year-old daughter, and her recognition of this fact does nothing to change it.

Quade is a writer to watch.