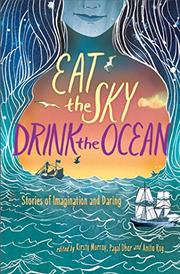 EAT THE SKY, DRINK THE OCEAN

A collection of stories that explores the speculative and sometimes-dystopian landscape, authored solely by women from India and Australia.

A multiverse that bursts with imagination, this anthology lures readers into a nonlinear progression of stories, both prose and graphic, and one script. There’s Isobelle Carmody and Prabha Mallya’s graphic sci-fi story “The Runners,” which imagines a world ruled by mothers and offers a Twilight Zone–esque surprise ending. In “Arctic Light,” by Vandana Singh, an Indian teenager is a stowaway undercover activist fighting for climate change on a ship sailing the East Siberian Sea. Kirsty Murray’s “Mirror Perfect” transports a girl and her younger twin siblings into a parallel universe, a dreamlike reality check that challenges her negative body image. This anthology represents a delightfully diverse collection of contributing authors, who also include Margo Lanagan, Justine Larbalestier, and Samhita Arni, among others. In a unique collaboration, the creators were partnered together into culture-bending exchanges of themes, worlds, and galaxies in an effort to expand their visions of their own cultures, some pairs crafting one story between the two but all sharing ideas. The editors rightly claim that their anthology “embraces the idea of not just eating pie but of taking big, hungry mouthfuls of life and embracing the world.”

This rare treat of speculative literature is a winning book for those young women who especially crave a read beyond the outer limits.