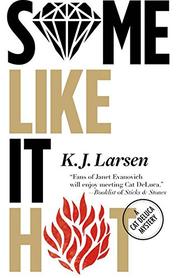 When a hometown boy turned shamus is killed, Cat DeLuca stops investigating liars and cheats and concentrates on finding a murderer.

Cat DeLuca, owner and chief operative of the Pants On Fire Detective Agency, has seen her share of liars and cheats. In fact, her own failed marriage to Johnnie Rizzo was the inspiration for her life’s work. She’s investigating yet another sleazeball when Santa Claus himself runs through Tierney's bar where she’s roosting. After rescuing the red-suited runaway from guys with guns, Cat discovers that he’s none other than Bill Bonham, her childhood fiance (well, until she was 9). Billy apparently has a detective agency of his own and dreams of Bogart despite his online license. But he’s gunned down the very night that Cat saves him. Cat’s vow to find out who killed Billy is spurred by his mother, who had hopes for a romantic reunion for the two. Cat doesn’t have the heart to disabuse her of this idea, even though she and FBI agent Chance Savino have been hot and heavy for a while now. Although family friend Police Capt. Bob refuses to investigate Tierney, Cat’s convinced it has something to do with him, especially when she finds out that the last case Billy took was something involving Tierney, his unsympathetic former employee Cristina and diamond earrings that may or may not have belonged to Marilyn Monroe. With her gun-toting sidekick, Cleo, Cat’s ready to do what it takes to get justice for Billy.

All of Cat’s cases (Sticks and Stones, 2012, etc.) have been co-authored by three sisters, but this is the first installment that reads that way. The characters are sassy as ever, but their adventures are disjointed and even perfunctory.