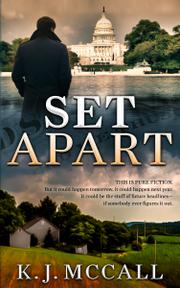 A debut thriller shines a spotlight on the potential for abuse in a national health care system.

McCall’s book centers on two siblings. Gordon Sand is a missing-persons detective in the Washington, D.C., Metropolitan Police Department’s Second District. Ada Sand, his sister, is an information systems specialist at the Department of Health and Human Services, much like the author herself was. Ada’s star has been on the rise during the preparations for the national health system called Americare, a priority of the new U.S. president, Dale Durham. The siblings split their time between Washington and bucolic Dorsey, Pennsylvania, where their doctor brother, David, and his family settled, next door to the Benedicts, a German Baptist clan. But Gordon’s and Ada’s worlds are destined to collide. That’s because Americare favors the rich and powerful through its tier system. Even worse, Americare’s leaders contract with an ex-soldier to kidnap well-matched citizens for body parts in order to keep sick Tier 1 VIPs alive. Based on the techniques used by this “Taker,” Gordon sees connections among seemingly random abductions, although Ada and his partner, Scottie Davenport, are skeptical. Then the Taker targets a Sand family member. Will Gordon and company expose Americare’s secrets? Using the guise of a mystery, McCall asks hard questions about the specifics of a national health care plan. Will it be equally available to all citizens? Or will those who are considered to have contributed more to society gain priority access? The author examines the latter option by creating a nightmare scenario in which ordinary people are sacrificed to keep the mighty and their families alive. Those just plain folks also end up waiting long months for “elective” surgeries that could enhance their quality of life. McCall has created likable characters in the extended Sand family as well as a nasty group of conniving health care bureaucrats. Particularly intriguing are the Benedicts, who live a simple lifestyle much like the Amish. Ultimately, McCall’s novel is an enjoyable blend of thriller, character study, and think piece.