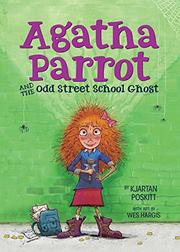 From the Agatha Parrot series

When the Odd Street School’s clock-tower bell rings off-schedule one night, Agatha Jane Parrot and her chums suspect a mischievous ghost may be the cause.

Agatha, a “very charming and lovely girl with crazy hair and awesome freckles,” lives at 5 Odd St., surrounded by her neighboring best friends, Ivy, Bianca, Ellie, and Martha. In Hargis’ comic black-and-white illustrations, Ivy and Bianca appear somewhat dark-skinned; the other girls, including Agatha, look to be white. One “dark and stormy night,” the school clock-tower bell rings 27 times, disturbing Agatha and her friends. After days of the bell tolling “TOO MANY DONGs,” Ellie suggests there might be a ghost in the tower, triggering the spread of ghost fever throughout the school. The subsequent inexplicable closing of a classroom window and appearance of a glowing face in the clock tower prompt the principal to organize a “GHOST WATCH!” in the school auditorium, where Agatha and her pals tell ghost stories and hilariously resolve the ghost mystery. Addressing readers with chatty directness, punctuated with many exclamations and exclamation points that substitute for nuance, Agatha proves an unflappable heroine.