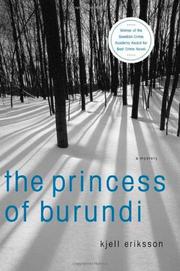 THE PRINCESS OF BURUNDI

The murder of a young father baffles police and upsets many in the sleepy town where he lived.

A jogger in Uppsala, Sweden, discovers the mutilated body of John Jonsson during a December run. “Little John” had been reported missing by his wife Berit. A construction worker and family man who shares with his son Justus an intense interest in tropical fish, like the eponymous Princess, John has a checkered past, including many arrests for petty crimes with his older brother Lennart. Ola Haver and his detective team follow up on the most promising lead, a high-stakes card game John played shortly before his disappearance. Though on maternity leave, detective Ann Lindell becomes obsessed with the case, calling Ola to compare notes, much to the consternation of his wife Rebecka, who understands their mutual attraction better than they do. Meanwhile, schoolteacher Gunilla Karlsson has reported the murder of one of her cats, a crime ignored by the police until cat-killer Vincent Hahn, who lives in squalor and sleeps with a mannequin, shows up at her door.

Subtle characters and precise prose will keep readers interested until the surprising solution. Erikkson (The Illuminated Path, 1999, not reviewed, etc.) won the award for Best Swedish Crime Novel, and deservedly so.