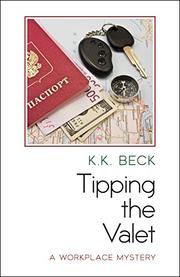 Beck (We Interrupt This Broadcast, 1997, etc.) takes another mordant look at the underemployed in this tale of a car jockey who drives everyone crazy.

Lukowski and MacNab, two of Seattle’s finest, are absolutely sure Tyler Benson must be guilty of something. They’re just not sure what. The kid’s fingerprints are all over the trunk of Gary and Caroline Smethurst’s gray Audi—the trunk containing the suitcase containing the dead body. The Smethursts, who rushed home early from their anniversary dinner at Ristorante Alba to provide homework help to their preteen daughter, who had not only a diorama, but a PowerPoint due the next day, have no idea how chop-shop technician Pavel Ivanovich Tarasov got into their trunk. Of course, neither does Tyler, who’s working for Elite Valet to pay off the student loans that his father, Roger Benson,  tricked him into signing for before taking the money and plowing it into Ricotteria, his failed make-it-yourself Italian takeout business. Still, the cops find it fishy that Tyler, whose usual gig is Donna’s Casino, was at Alba at all on the night the suitcase was dumped, which was also the night shots were fired at zillionaire Scott Duckworth, who happens to be Roger’s old boss. And that one of Roger’s Ugg slippers was found at the scene. Of course, they show passing interest in cousins Dmytro and Volodya Zelenko, who, despite being Ukrainian, are reputed to be members of the Russian Mafia, along with their Georgian henchman, Sergei Lagunov. And they also eyeball Duckworth’s bodyguard, Red Ott. Still, when they find a .22 in Tyler’s car, and discover Tyler has a felony conviction, possible weapons possession charges seem the least of the valet’s worries.

Beck is back, and lovers of the antic, the manic, and the just plain off-the-wall will revel in her return.