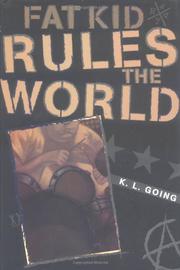 Curt MacCrae, a semi-homeless, blond ferret of a boy and guitar genius, saves big Troy Billings from leaping to a splattering demise in front of the F train. The two boys form an unlikely friendship, each offering what the other needs and, ultimately, saving each other’s life. Curt recruits Troy to be the drummer in his band, Rage/Tectonic, and the story gathers momentum as the first gig approaches. The problem is that Troy isn’t much of a drummer. It takes lessons from a scarecrow of a guy with a purple Mohawk to get his skills in shape, thus adding another larger-than-life character to the assemblage. Just as Curt saved Troy’s life, Troy must find a way to help Curt, who is sick, addicted, and malnourished. Newcomer Going’s descriptive writing sometimes goes over the top, but it’s also what makes this offering come alive from the very first page. The strong language and themes make this a raw, yet immensely likable tale for older teens. (Fiction. YA)