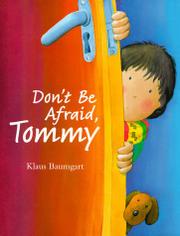 “Tommy was scared of everything,” Baumgart begins, in this exhausting saga of a fearful child. Tommy doesn’t like the rain (he’ll have to wear his boots, and they might harbor something creepy and crawly), he’s scared of the beach (he wears a scarf to ward off a chill should the sun go under), and he’s scared of the usual: spiders, night, baths. For his birthday, his mother gives him a little dog, Roly, telling Tommy that he will have to teach Roly not to be afraid. Tommy does just that, shedding his fears like so many molted feathers, explaining to Roly about the wind in the trees at night, and the pleasures of cavorting in the bath. When readers are finally let in on the joke—Roly is a toy dog—Tommy has come to believe that “too much imagination wasn’t such a bad thing after all. It helped make Roly seem like a real dog.” Tommy’s fears receive protracted treatment and his reversal is collapsed into a few sunny pages; despite the charming illustrations of every expressive moment, it’s unlikely that children with Tommy’s problem will find much solace in this tale. (Picture book. 3-7)