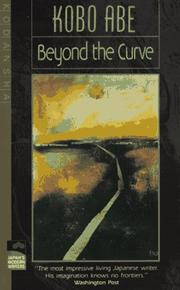 A short-fiction collection from the noted Japanese author Abe (Woman in the Dunes, The Ark Sakura, etc.)—pieces whose originality is sometimes overwhelmed by their relentless surrealism. All the stories depend on a similar premise: a seemingly commonplace situation that increasingly becomes menacing and surreal. In the title story, a man suddenly becomes amnesiac on his way home, just before the curve on the road. There are tantalizing memories of past associations that he does not trust—he could be a thief returning to the scene of a crime, or a traveller who once stopped there en route to somewhere else. In the end he even wonders whether the time before his loss of memory "had itself been a strange dream." In "Dendrocacalia," a young man idly kicking a stone by the side of the road ends up as a rare plant in a conservatory. A Martian asks a noted authority on space travel ("The Special Envoy") for his help, but is rejected by the pompous and self-absorbed professor, who dismisses him as a lunatic. Business cards turn into the people they represent; a mysterious dead body disappears in an apartment and creates a test of courage for a young man; and an advertising agency that has developed a "System" to stimulate creativity commissions a bizarre building from an architect. Only one story, "The Dream Soldier," in its evocation of family love and shame, is more affecting, less cerebral. A writer of ideas and a creator of striking images, Abe writes more from the head than the heart. A stimulating but eventually sterile road.