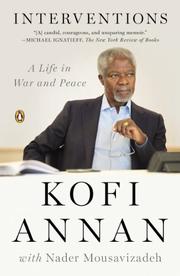 A Life in War and Peace

by Kofi Annan with Nader Mousavizadeh

With the assistance of Oxford Analytica CEO Mousavizadeh (editor: The Black Book of Bosnia: The Consequences of Appeasement, 1996), former United Nations Secretary-General Annan discusses the major benchmarks of his life and career.

The author, born in 1934, passes briefly over his education and early career at the World Health Organization and U.N., where he worked until his retirement in 2006, and moves rapidly into his main topic: the transformation of U.N. Peacekeeping Operations since the late 1980s and early ’90s. Since then, the idea that the U.N. Security Council can deploy military force to intervene in conflicts within sovereign nations and to protect human rights has become institutionalized. Because the transformation paralleled the progress of his own career, Annan, who was promoted to the directorate of PKO in 1993 and secretary-general in 1997, is uniquely situated to chronicle this time period in the organization, and he identifies three significant dates: 1992, after Desert Storm; 1998, after the Bosnian conflict and the Rwandan genocide; and again in 2005. First, consent of all the parties to a conflict was no longer required; then the need for self-contained fighting forces to drive military outcomes was recognized; and finally, there was the adoption of what its sponsors called “the responsibility to protect.” However, the U.N. has often lacked the means—specifically the “self-contained fighting force”—to accomplish some of its goals, so disagreement has been ongoing between nationalist interests and those who aspire to exercise the powers of a world government. Annan also discusses his roles in the U.N.’s millennial development program and its work on AIDS.

An insider's personal account based on lessons drawn from long experience. Aspects of this book complement Jacques Chirac's autobiography, My Life in Politics (2012).