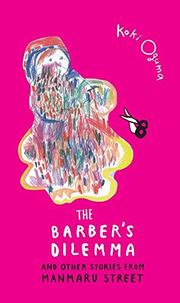 And Other Stories from Manmaru Street

Oguma’s doodles take on a life of their own in this nonlinear tale. Magic pockets produce snakes and crocodiles; a soup’s seaweed chats away; and hats made of cream or cheese and slides made of candy seem unremarkable. Each spread contains an idiosyncratic slice of life. From the imaginative, droll text (rendered in English by Wolf) to the collection’s layout, readers may draw parallels to Shel Silverstein; however, Oguma’s vignettes are told in a stream-of-consciousness style, matching the spontaneity of his art. The playful illustrations blend a loose figurative style with abstract patterning. Pencil and watercolors in a pastel palette showcase Oguma’s expressive style. A young woman loves mushrooms so much that her boyfriend appears in a mushroom costume and bearing a giant mushroom, prompting the question, “So what does Mr. Kiyota’s girlfriend like better?” Studying the picture of the two, readers see his mushroom-patterned garb, which blends with the enormous mushroom he holds; his girlfriend’s speech bubble, full of nothing but mushrooms, hovers over his head, making it look itself like a giant mushroom. As with Silverstein’s Where the Sidewalk Ends, readers may enjoy one or many spreads at a time—the treasures within beckon repeat visits and offer inspiration for the classroom or artist.