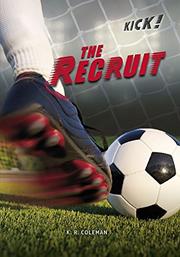 From the Kick! series

This volume in the Kick! series kicks off with Tessa Dobbs finishing her last season of high school soccer and wondering what the future holds for her.

Tessa is a good player. But how good? It’s not easy to know playing in a small rural town in the middle of nowhere. But when her best friend, Ellen, says her older sister, Sadie, might be able to connect her with Coach Miller from nearby Yates University, Tessa is excited. The coach comes to a game, sees Tessa punch in a game-winning penalty kick, and things are looking good. But status-seeking Sadie also wants Tessa to pledge the Omega Phi sorority and ditch her current boyfriend, Ben, deemed not cool enough for Sadie’s crowd. When Tessa does, indeed, get accepted to Yates, does she owe Sadie? She knows Sadie is capable of making her life miserable if she doesn’t break up with Ben, but why should she have to do that? For a hi-lo novel targeted at reluctant middle and high school readers, the conflict is realistic, nuanced, and not resolved too simplistically. Plenty of soccer action, told in a zippy present tense, will appeal to the intended audience. The series, with installments by different authors, follows the formula of soccer action wrapped around a central conflict. In Israel Keats’ The Heir, Rob Briggs must decide what’s more important, soccer or the Battle of the Bands competition. Malik, in Chris Kreie’s The Captain, must carry his team on in the wake of a cheating scandal at school. And in The Natural, also by Kreie, Kamal’s position on the team is threatened by a talented newcomer. Reluctant readers will not be so reluctant after The Recruit; in fact, they’re likely to gobble up the entire series and become readers in the process, ready, perhaps, for more sophisticated fare such as Kwame Alexander’s Booked (2016) and Edward Bloor’s Tangerine (1997).