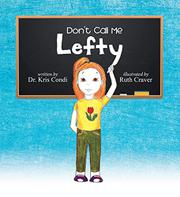 A young girl learns to appreciate her left-handedness in this illustrated children’s book from author Condi and artist Craver (N Is for Noah, 2017).

When left-handed Gracie and right-handed Scott bump elbows while drawing in Miss Kite’s class, it sends the girl into a downward spiral. Scott insists on calling her “Lefty” all day long, and to hide her embarrassment at being different, she tries to use her right hand—with awful results. Gracie also encounters a number of obstacles, including pencil sharpeners, baseball mitts, measuring cups, ice-cream scoops, can openers, measuring tape, and scissors that are all designed for right-handed users. The girl’s mother initially encourages her to use things in the right-handed way, but she also arranges for Gracie and another classmate to visit the girl’s left-handed artist grandmother, who’s more encouraging. Later, Miss Kite insightfully assigns a project to help Gracie take pride in her handedness. Craver’s pencil-and-crayon drawings have an amateurish, unfinished feel, but they ably capture Gracie’s emotions and feature classmates with skin tones that are different from the white Gracie’s. Condi uses approachable, straightforward vocabulary, and the dialogue feels authentic to childhood conversations—particularly her classmates’ mocking comments. Some scene transitions feel abrupt, though, such as how Gracie’s conversation with her mother about her day quickly turns into a list of all the tools that the youngster struggles to use; readers may also wonder why Gracie’s mother isn’t more sympathetic to her plight. Miss Kite’s innovative solution of assigning confidence-building research is sure to please, and the story’s conclusion may encourage left-handed readers to request resources for their own schools.

A simple but engaging story that will resonate with left-handed readers—and may open the eyes of right-handed ones.