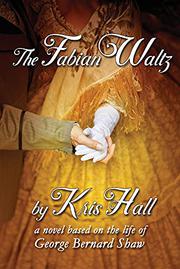 A Novel Based on the Life of George Bernard Shaw

Love blossoms and repartee flows for playwright George Bernard Shaw and his coterie of late-Victorian literati and socialists in this blithe historical novel.

Hall’s yarn fictionalizes the relationships of three notable real-life couples at the center of British intellectual life in the 1890s. One is the attraction of Shaw, a self-proclaimed “writing machine” who insists that his work is too important to permit any commitment to a woman, to Charlotte Payne-Townshend, a down-to-earth heiress who puts up with Shaw’s vanity but proves adept at puncturing it: “You regard yourself as a fountain of genius indifferently showering anyone who comes near,” she tells him. “That makes you a splendid natural wonder, but a decidedly poor friend.” Another is the initially unrequited passion of Sidney Webb, Shaw’s colleague at the socialist Fabian Society, for socialist reformer Beatrice Potter; the two are obvious soul mates, but Potter lacks romantic interest in Webb because of his unappealing looks. And there’s the psychodrama of playwright and legendary phrasemaker Oscar Wilde and his grasping boyfriend, Lord Alfred Douglas, which later leads to Wilde’s ruin. The characters float through London’s restaurants, theaters, salons, and lecture halls and then spend much of the book at the Fabians’ summer cottage in the country; there, they suffer the inedible vegetarian diet that Shaw imposes on everyone and engage in sophisticated conversation about politics, morality, and affairs of the heart. Hall’s novel unfolds through diaries and letters, but it has a polished, theatrical air that’s redolent of Shaw’s and Wilde’s comedies; his version of Shaw has an acerbic egotism worthy of Pygmalion’s Henry Higgins, while Wilde is an inexhaustible source of witticism that hides depths of reflection beneath a surface of frivolous irony: “I adore morality,” he asserts. “It gives my sins their significance.” The other characters also get their due as they go about the work of steady, gradual remediation of society’s ills, and, along the way, they quietly steal the show from the brilliant talkers. The result is an engrossing period piece with gorgeous wordplay and a touch of serious thinking to boot.

A sparkling re-creation of Britain’s literary and political avant-garde.