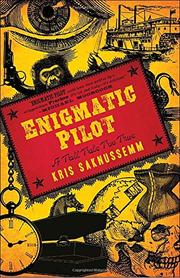 A Tall Tale Too True

It's the 1840s, and Hephaestus Sitturd, son of an itinerant Baptist preacher and a half-Shawnee woman, marries Rapture Meadhorn, whose escaped slave grandfather was a Creole Gullah from the Carolina sea islands. Rapture is an herbalist and healer, valued in the wilderness community of Zanesville, Ohio, but Hephaestus is a tinkerer, intent on building a Time Ark to confront the end-of-the-world prophecies of one William Miller. To the pair is born Lloyd Meadhorn Sitturd, a preternatural genius. At age six, he speaks multiple languages, solves complicated mathematical problems and constructs assorted airships. Dogged by debts and persecuted by bigots, the trio sets out for Amarillo to join Micah Jefferson Sitturd, Hephaestus' half brother, a former Texas Ranger. And thus begins a trek, not Pilgrim's Progress, not an Odyssey, but rather a tropological literary journey down the Ohio to Porkopolis (Cincinnati), across to St. Louis and up the Missouri to Independence. Along the way Lloyd meets Henri St. Ives, a gambler with a fantastical mechanical hand, Professor Mulrooney, married to identical twins who serve as assistants in his traveling medicine show, Urim and Thurimmun, microcephalics deposited in Illinois by a tornado, an underground oracle, and possible agents of the Spirosians and the Vardogers, two secret societies. There's time for Lloyd to fall in love with Hattie, a runaway slave, and attempt interpretation of the scripture of the Quists, a persecuted religious sect. Despite the fabulist plot, Saknussemm's imagination and narrative skills hold the adventure together. Written in connected sequences, the book opens with a surrealistic prologue set in 1869. A young lieutenant on a Great Plains mapping mission observes a man mounted on a mule holding a white gyrfalcon. Is it Lloyd? Readers can only imagine, for the book ends as the Sitturd party sets out from Independence toward Texas.