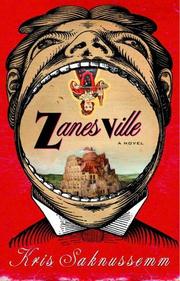 An amnesiac with powers that amaze even him crosses a hyper-commercial continent in search of his identity and any other answers he can dig up.

Wandering into the churning world of refugees from a post-earthquake America-of-the-future, a small city hidden under Central Park, the hero of debut novelist Saknussemm’s futurist fable agrees to go by the name that the jumpy band of humans and humanoids gives him: Clearfather. Clearfather is no less exceptional than his hosts. He has a substantial sex organ, as well as an ability to stop attacks by chanting doggerel. He’s got writing scarred into his back, and his white-blond hair reaches the floor. Aretha, the current leader of Clearfather’s rescuers, is a black ex-lawyer, ex-linebacker drag queen whose estranged son is poised to become the first gay world heavyweight boxing champion. Good hostess that she is, Aretha arranges a bio-scan for Clearfather to clear up some of the mysteries about the man, and, indeed, possible ties to a fabled 19th-century genius turn up. In the process, the bio-scanner implants gizmos in Clearfather’s brain that will cause problems for him when he slips away from his hosts and hops a Greyhound Scenicruiser headed for Pittsburgh. Clearwater carries with him a talisman, an ivory ball that evokes memories of a past with a kindly aunt and uncle somewhere in the Dakotas, but the road to that aunt and uncle is long, and his every move is watched and recorded by an industrial conglomerate that seems threatened by his existence. His trip will take him to Texas, a place with strong psychic claims, and to Las Vegas, the theme park on steroids that replaced L.A. when that big corner of the continent slumped into the ocean.

Visually stunning even without a single illustration, but the dense writing in this exuberantly weird, rambling tale calls for ready and willing readers.