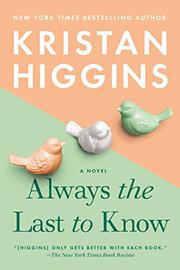 ALWAYS THE LAST TO KNOW

Secrets are revealed and old wounds are healed as a family attempts to deal with a medical emergency.

Barb Frost knew her marriage wasn’t perfect. She and John had been married for 50 years, but she was unhappy and thinking about leaving, keeping herself busy as first selectman of their small Connecticut town. But then John has a stroke. Barb and John’s daughters rush to the hospital to see him—responsible architect and mom Juliet has always been Barb’s favorite while freedom-loving artist Sadie was her father’s girl. Things are bad enough, but then Barb gets the shock of her life when she goes through John’s phone—and finds out he’s been having an affair. Barb tries to keep the secret from her daughters, knowing it would upset them, but the girls have struggles of their own. Juliet is dealing with secret panic attacks and feels like she can’t handle being a perfect wife, mom, and career woman. Sadie, who moves back home from New York City to help care for her dad, now has to confront Noah Pelletier, her high school sweetheart and the man she’s never been able to forget. He wanted to marry her and stay in their idyllic small town, but she wanted to explore the art world in New York—but now, she’s not so sure that was the right decision. Higgins handles difficult topics with aplomb, mining even the darkest subjects (infidelity, infertility, mortality) with a sense of humor. She resists painting her characters with broad strokes, allowing readers to see the humanity in each person. Sadie and Noah’s love story is angst-filled enough to warrant its own steamy romance novel, but the most touching relationships are the ones Barb has with her daughters and her best friend, Caro, who is Barb’s constant companion as she deals with the fallout of John’s stroke. As Barb puts it, love doesn’t “have to be romantic to encircle you in its arms.”

A masterful exploration of all kinds of love—romance, family, and friendship—that will make even a cynic cry.