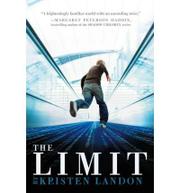 Fast paced and inventive, this dystopian thriller follows a math whiz who runs afoul of an intrusive government. In 13-year-old Matt's world, the government can place children in workhouses if a family spends over their debt limit. Matt's family scoffs at others who can't keep track of their finances until they, too, overspend, and Matt finds himself carted off to a high-rise facility. Because he's a genius, Matt is placed on the top floor, living luxuriously as he works for corporations, trying to pay down his family's debt. When several children suffer from debilitating headaches and seizures that don't alarm the staff, Matt realizes something's wrong and uses his hacking skills to uncover what's really going on. Landon never fills out a mind-reprogramming element in her story line, focusing instead on simple snooping and chase scenes to boost suspense. She more or less succeeds, penning a story with a creative scenario that easily holds readers' interest even if it doesn't stretch their imaginations much. Diverting entertainment with an original premise that's never wholly realized. (Thriller. 8-12)