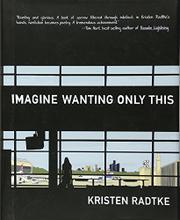 IMAGINE WANTING ONLY THIS

Insights and images combine in a meditation on loss, grief, and the illusions of permanence.

Sarabande Books managing editor Radtke isn’t an artist who also writes a little or a writer who scrawls but a master of both prose narrative and visual art. Like memory, the narrative loosens the binds of chronology, playing hopscotch through the author’s girlhood, college, formative years as an artist, and apocalyptic fantasy of her current home in New York. A strain of heart failure seems to run in Radtke’s family, and the key to this memoir is the death of her favorite uncle, who was recovering from the surgery that ultimately killed him and whose death made the author and her family all the more concerned with the family medical history. The event also planted the seed for this book and its larger thematic focus, as Radtke became “consumed by the question of how something that is can become, very suddenly, something that isn’t.” On her return home for the funeral, the author discovered an abandoned mining town that she would later revisit. During art school, she became fascinated by Gary, Indiana, a city in ruins, where she discovered the photos of someone whose attempts to document the city led to his death. She left a fiance and what she imagined to be a “stagnant future” for vagabond travels taking her from the ruins of Italy to the ravages of Southeast Asia, while her own heart condition gave notions of impermanence and loss a personal emphasis. “I couldn’t comprehend why the dead couldn’t be made undead,” she writes. “Why a heart that caved couldn’t be filled out again.” In a way, what she has done in this impressive book is to revive the dead and recover the lost while illuminating a world in flux, in which change is the only constant.

Powerfully illustrated and incisively written—a subtle dazzler of a debut.