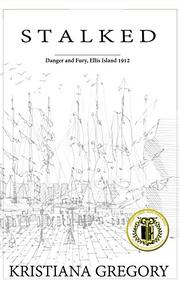 Gregory’s (My Darlin' Clementine, 2009, etc.) latest YA thriller features a young seamstress from Denmark who encounters a dangerous stranger on her journey to early 1900s America.

Fifteen-year-old Rikke Svendsen is down on her luck. Unfairly ousted from her comfortable position as seamstress to the queen of Denmark and then banished from the country, she makes her way to New York aboard a passenger ship. She hopes to reunite with family members in Racine, Wis. As an unaccompanied young woman, however, she needs sponsorship in order to successfully pass through the doors of Ellis Island. The family she connects with seems amiable—until the father makes unwanted advances on Rikke. Spurned, he becomes more and more obsessed with her, until she breaks away by cleverly eluding him and his family at the immigration station. She slowly settles into a life as a seamstress in New York’s Lower East Side, saving money for the train fare to Racine. Through letters from friends and family there, she learns that a mysterious man has arrived and has been asking about her. When inexplicable “accidents” lead to injuries and even the deaths of her loved ones, Rikke realizes the man from the boat is determined to find her, and he’ll harm anyone in his way. Rikke and her New York friends devise a cunning plan to lure him to New York—and justice. Gregory achieves a realistic, rich atmosphere with insightful details about the immigration process and New York’s tenements in the early 1900s. Rikke is a resourceful, intelligent protagonist, but she exhibits too few character flaws to be truly convincing. She displays a relatively small degree of the fear and excitement someone in her position must have felt, and readers may also be distanced by her rather quiet emotions, especially in relation to her suitor, Viggo. The story moves at a satisfyingly rapid, suspenseful pace, although the too-tidy denouement is a bit of a letdown. Upon finishing the book, readers will have enjoyed Rikke’s company, but they may also wish she’d left more of an impression.

An atmospheric confection that will thrill YA readers.