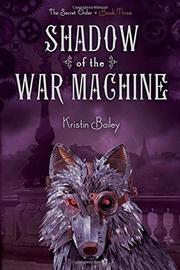 SHADOW OF THE WAR MACHINE

From the Secret Order series, volume 3

The high-stakes conclusion of Meg’s quest to become an Amusementist and find her missing grandfather.

Resourceful Meg overcame her low station in The Legacy of the Clockwork Key (2013) and defeated naysayers as an Academy apprentice in Rise of the Arcane Fire (2014), but her possible future—be it in the Order or marriage—won’t matter if the mysterious man with the clockwork mask gets her first. Meg’s classmates rally to help; they find a lead not just to her longtime antagonist, but also potentially to her grandfather. Two obstacles would prevent her from chasing the lead. First, there are matters of propriety and the potentially irreparable damage that can be done to a young lady’s reputation through misadventure. The second challenge is temporal. To follow that critical lead, she must travel from London to France—but just six days hence, the man with the clockwork mask sails for America from England and she must attend the New Year’s Eve Amusementist meeting to swear her oath to the Academy or risk losing her spot as an apprentice (and future as an Amusementist). Meg’s personal ambitions and yearnings for freedom prevent the romantic storyline from devolving into a love triangle, and her frustrations with societal conventions make her sympathetic while adding drama and upping the stakes.