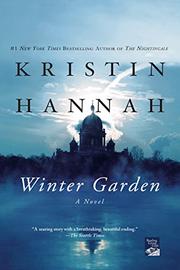 Meredith, heir apparent to her family’s thriving Washington State apple enterprises, and Nina, a globetrotting photojournalist, grew up feeling marginalized by their mother. Anya saw her daughters as merely incidental to her grateful love for their father Evan, who rescued her from a German prison camp. The girls know neither their mother’s true age, nor the answers to several other mysteries: her color-blindness, her habit of hoarding food despite the family’s prosperity and the significance of her “winter garden” with its odd Cyrillic-inscribed columns. The only thawing in Anya’s mien occurs when she relates a fairy tale about a peasant girl who meets a prince and their struggles to live happily ever after during the reign of a tyrannical Black Knight. After Evan dies, the family comes unraveled: Anya shows signs of dementia; Nina and Meredith feud over whether to move Mom from her beloved dacha-style home, named Belye Nochi after the summer “white nights” of her native Leningrad (St. Petersburg). Anya, now elderly but of preternaturally youthful appearance—her white hair has been that way as long as the girls can remember—keeps babbling about leather belts boiled for soup, furniture broken up for firewood and other oddities. Prompted by her daughters’ snooping and a few vodka-driven dinners, she grudgingly divulges her story. She is not Anya, but Vera, sole survivor of a Russian family; her father, grandmother, mother, sister, husband and two children were all lost either to Stalin’s terror or during the German army’s siege of Leningrad. Anya’s chronicle of the 900-day siege, during which more than half a million civilians perished from hunger and cold, imparts new gravitas to the novel, easily overwhelming her daughters’ more conventional “issues.” The effect, however, is all but vitiated by a manipulative and contrived ending.