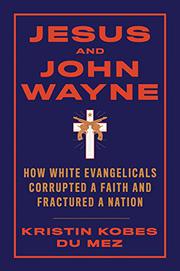 How White Evangelicals Corrupted a Faith and Fractured a Nation

Masculinity and militarism in the evangelical movement.

History professor Du Mez traces the roles of gender, race, and nationalism through the modern history of the Christian evangelical movement, from the rise of Billy Graham to the election of Donald Trump. “For conservative white evangelicals,” writes the author, “the ‘good news’ of the Christian Gospel has become inextricably linked to a staunch commitment to patriarchal authority, gender difference, and Christian nationalism, and all of these are intertwined with white racial identity.” Faced with the prospect of communism as early as the late 1940s, white evangelicals began espousing a masculinized, even militarized version of Christianity. This trend made heroes out of particularly masculine religious leaders such as Graham as well as outspoken personalities like actor John Wayne. “Through his films and his politics,” Du Mez writes, “Wayne established himself as the embodiment of rugged, all-American masculinity,” and his “masculinity was unapologetically imperialist.” Reacting to societal unrest and rebellion, conservatives such as psychologist James Dobson, founder of Focus on the Family, advocated for strict discipline of children and patriarchal control of the home through the 1970s and ’80s. With the end of the Cold War, evangelicals turned their attentions to moral issues, fighting liberalism through such mouthpieces as Rush Limbaugh and Bill O’Reilly. After 9/11, evangelicals turned their attention to militant Islam, invigorating the movement because “militant evangelicalism was always at its strongest with a clear enemy to fight.” Barack Obama also provided evangelicals with fodder for activism. “Trump,” writes Du Mez, is “a man whose rugged masculinity was forged in 1950s America, a time when all was right with the world,” and he became “the culmination of [evangelicals’] half-century-long pursuit of a militant Christian masculinity.” Despite a few moments of overt subjectivity, the well-researched narrative is reasoned and dispassionate. While the author often paints with a broad brush, characterizing white evangelicals throughout as racist, hypernationalistic, and utterly patriarchal, readers not on the fringe right will find it difficult to take issue with her arguments.