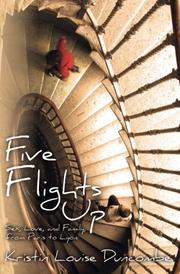 Sex, Love, and Family, from Paris to Lyon

Duncombe (Trailing, 2012), an expat therapist who specializes in uprooted families, writes about her own family’s transition from Paris to Lyon, France.

This exceedingly readable memoir begins on a somewhat sour note. After eight years in Paris, the author’s husband, Tano, took a job in the smaller city of Lyon, insisting that he’d had “enough of the big city life. Enough of the cost of living. Enough of our family of four crammed into a 635-square-feet-apartment.” Duncombe was a sort of professional expat herself due to her father’s career with the U.S. Foreign Service, so she was more suited to the nomadic life than most. She even worked as a therapist, advising families on how to handle just the sort of transition she now faced. But giving advice is often easier than living it. Lyon, she says, was “a French San Diego….I have never seen so many people in spandex.” Things began to look up, though, when she found an enormous—and enormously charming—apartment in a shamelessly expensive neighborhood. One major drawback: the titular five flights of stairs—a vertigo-inducing climb, with or without groceries. Still, once Duncombe focuses on her creation of a new life, her writing undergoes a remarkable transformation. Pre-move, her tone comes off as complaining, as Tano wants to live in the suburbs, and she wants to live in town: “Without French driver’s licenses we cannot get a car, and without a car there is no way we can live in the rural suburbs, and this suits me just fine,” she notes. But with Paris in the rearview mirror (mostly), her observations become much sharper and her tone a lot livelier. She’s also funny; in a scene at her little boy’s after-school playgroup, for example, she dubs a triumvirate of sleek French mothers/mistresses “The Charlie’s Angels.” Her impression of another group, “the Louis Vuitton plastic surgery trio,” is less favorable: “frail ankles and age-spotted hands give them away as much older women.” Although this book may get off to a stumbling start, patient readers will find this a smart story for smart women (and men).

An enormously appealing memoir despite a slow start.