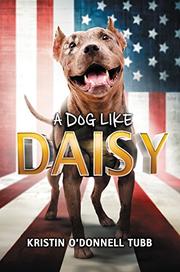 Who really knows how a horse (or, in this case, a dog) thinks? Tubb has taken a stab at it, and for dog lovers, Daisy’s first-dog voice will be completely believable. Confined in an animal shelter, she’s chosen by the Colonel, a brave war veteran suffering from severe PTSD, his young teen son, Micah, and Alex, a dog trainer, to be trained to be the Colonel’s service animal. Daisy is eager to please and willing to give her all to help this suffering Mexican-American family. Sadly, she seems to have PTSD herself after a brutal first home where she was forced to fight other dogs and the loss of her litter of puppies to a garbage truck (a terrifying scene revealed in flashback). Daisy’s wry comments on human foibles and eccentricities, along with her sensitive, growing understanding of the broken dynamic of the Colonel’s family (she observes that Micah constantly wears headphones that no one realizes are shut off, for example), combine to paint a moving picture of suffering and, ultimately, redemption. At times issues are oversimplified; the Colonel’s rejection of Daisy after she twice fails her certification test followed by his abrupt change of heart in deciding to keep her on as a family pet feels facile.

Daisy is distinctive and memorable, and this depiction of PTSD is useful, making this a fine, compelling tale.