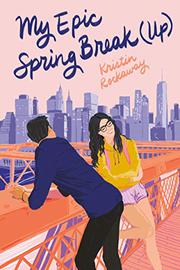 MY EPIC SPRING BREAK (UP)

High school junior Ashley’s ultimate goal is to leave Brooklyn behind and achieve success as a software engineer in Silicon Valley. Between being a mathlete, belonging to a coding club, and tutoring classmates in math, she has been doing everything she can to prove to colleges that she’s dedicated to studying STEM. Ashley believes she’ll have no trouble landing a summer internship with the popular social media platform ZigZag. However, her two-week spring break is off to a poor start when they send her a rejection letter. Frustrated with having tried to do everything right, when she runs into her crush, Walker, she decides to put herself out there and have more fun. Jason, Ashley’s lifelong friend and literal boy next door, warns her that Walker is bad news, however. When Jason joins Ashley’s coding team for a spring break hackathon, she starts to see something special in the boy who has been there all along. Ashley comes across as authentic and driven—but not consumed—by her ambitions, and the role of STEM in the story is both natural and noteworthy. Ashley’s sometimes-misguided choices feel genuine, and her disappointments real. Main characters are White by default; surnames indicate some diversity in the supporting cast.