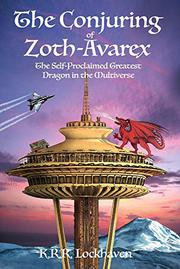 The Self-Proclaimed Greatest Dragon in the Multiverse

A fantasy novel in which a grandiose dragon declares his independence.

In this rambunctious debut, Lockhaven imagines a secret sorcery instruction institute that’s far different from Hogwarts, although it does feature avian messengers and quirky field sports. The Site, on the West Coast of the United States, was first opened in 1943 and has been dedicated ever since to harnessing magic for the good of the school, the country, and humanity—very much in that order. It has three new hires, in an echo of the main trio of the Potterverse: Harris Reed, Silvia Flores, and Patrick Nash are all conjurers, and during their orientation, they, and readers, are introduced to the Site’s spacious campus with its Conjuring Department, Prophecy Department, Realm Travel Department, and so on. They have arrived at the Site at a very auspicious moment—one that has been no less than 37 years in the making: Under the careful direction of the Conjuring Department, the Site is ready to whip up a dragon—one that they’re confident will be bound to their will and obediently help American interests. However, once the great dragon Zoth-Avarex appears, it’s clear that he has other ideas: He easily casts aside the bonds of the Site’s magic, snatches up Silvia as his princess-captive, and flies off over the landscape (“if he really concentrated, he could almost hear the screams of the people below. It was just like old times”). He takes Silvia to the top of Seattle’s Space Needle and there makes a den, where he waits for a gold tribute from all the nations of the world. Before long, the creature becomes a worldwide media star.

Lockhaven impressively controls all of this fun from the very first page, offering an endless array of allusions to canonical fantasy literature as well as quite a few snide asides, such as a sign tacked up in one of the Site’s labs: “Absolutely No Conjuring of Sparkly Vampires.” There are references to Star Wars (“I made the Kessel run in less than eleven parsecs”) and J.R.R. Tolkien and a moment when a magician offers Zoth-Avarex a dragon-rider specially trained on Pern, evoking a scornful response: “I’m not a horse, I’m a super-intelligent force of nature. I made your Einstein look like a preschooler the day I cracked out of my egg.” The exaggerated reputation of the Site (“this was the pinnacle of human civilization”) is perfectly played against its officials’ officious incompetence, and although Zoth-Avarex shares the typical charisma of folkloric dragons, he’s much funnier and more media-savvy; indeed, he’s easily the best character in the book. The human drama involving Harris and Silvia and the hapless Site administrators is conveyed with heart and empathy, but it pales in comparison to the conjured creature’s endless stream of quips and insights. The author keeps the plot hurtling along with a strong sense of pacing and a good deal of wit, and longtime fantasy readers are sure to enjoy every minute.