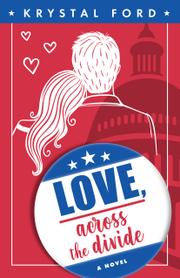 LOVE, ACROSS THE DIVIDE

In Ford’s debut novel, an unwed woman has her sights set on political office and searches for a powerful partner to help get her there.

Soon after U.S. Rep. White (R-Florida) secures another term, he taps his campaign manager, Megan Thompson, to be his 2018 successor, and he offers her a job as his aide in Washington, D.C., in charge of energy and environmental legislation. However, the fact that she’s a single woman—she recently called off a wedding when she discovered that her fiance cheated on her with her best friend—could be off-putting to voters, especially social conservatives. So White arranges for Megan to go on a dating tour to find a “strategic power match,” though she largely finds disappointment instead. Eventually, though, she meets Brock Tolbert, a spokesman for the National Rifle Association who’s charming, well-connected, and handsome—politically perfect. Meanwhile, she sees her new roommate, Andrew Croswell, as the bane of her existence; she thinks that he’s a smug, opinionated, “liberal libido killer.” He works for a group that’s lobbying for a more robust approach to climate change. Although his and Megan’s relationship begins in mutual acrimony, their enmity soon eases into friendly détente and then sweetly flirts with something deeper—and less platonic. Author Ford pulls off an impressive trick, artfully combining two seemingly incongruent genres in a companionably lighthearted romance and an astute political commentary on transcending partisanship. The author has a refreshing talent for humanizing ideological conflict, and both Megan and Andrew turn out to be far more complex than their political leanings would suggest. The plot occasionally loses its steam and slows to a meandering stroll, and the novel as whole would benefit from a shorter page count. Also, Andrew is initially presented as so insufferably shrill, that it isn’t easy for Ford, or the reader, to get rid of that first impression. However, this is a subtly ambitious work that doesn’t shy away from contentious subjects, such as same-sex marriage and climate change, and it squarely confronts the most controversial topic of the day—the presidency of Donald Trump.

An upbeat and thoughtful blend of romance and politics.