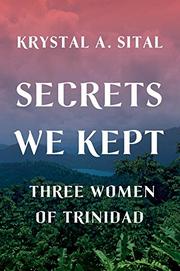 by Krystal A. Sital

A freelance journalist (New York Times Magazine, Salon, etc.) debuts with a wrenching, deeply personal memoir about the lives of three generations of women in Trinidad and Tobago.

Any romantic, sunny notions about Caribbean island life vanish quickly in this stark account of a place where cultures clash, men dominate, and women often suffer. The author’s own story is generally in the background; instead, she focuses on the wretched early lives of her grandmother and mother, both of whom, especially the grandmother, had to deal with husbands so physically abusive that the descriptions, which seem almost surreal at times, become like blows themselves. Miscarriages ensued in some cases. In a few instances, the women lashed back—there’s a beating of a man with a board and a choking—but mostly it’s men punching and women bleeding. Sital also provides horrendously eye-opening stories about class and cultural discrimination and abuse, in daily life and especially in the schools the women attended. What they had to endure is almost beyond belief, and the author captures it all. The women eventually escaped to the United States, where they forged new, more hopeful futures and also served caretaking roles for the head abuser himself, the grandfather, whose several brain surgeries put him at the mercy of the very women he’d dominated. Tears were rare as he sank toward his death. The author moves us back and forth—one woman’s story to another, one time period to another—and she records the dialogue in dialect, so readers should slow down to take it all in. At times, it is astonishing to read the volume of specific detail from these women’s lives: it appears that punches and kicks carry with them the details of awful words and deeds, all of which are recorded in bruises visible and invisible.

A powerful, disturbing narrative in which pain flows out from the page, drenching readers.