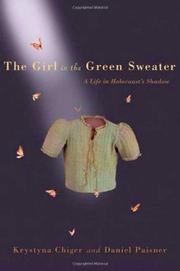 THE GIRL IN THE GREEN SWEATER

A Life in Holocaust’s Shadow

by Krystyna Chiger with Daniel Paisner

Gripping memoir of a Polish family that escaped the Nazi liquidation of Jews by living in sewers for 14 months.

Assisted by veteran co-author Paisner (Last Man Down: A Firefighter’s Story of Survival and Escape from the World Trade Center, 2002, etc.), Chiger begins her story with short, colorful childhood memories of idyllic life in prewar Lvov: “Like a princess. That is how I grew up, like a character from a storybook fable.” With the Nazi invasion on September 1, 1939, however, everything in four-year-old Krystyna’s life unraveled. Under the Hitler-Stalin nonaggression pact, at first the Soviets ruled eastern Poland, including Lvov. They nationalized her parents’ textile shop and forced the family to take additional residents into its spacious apartment, but things were “mostly okay.” But not after Hitler declared war on Russia in June 1941, and the Nazis occupied all of Poland. They used Ukrainian soldiers to terrorize and persecute Lvov’s 150,000 Jews; theft, destruction of Jewish businesses, systematic forced labor and murder became everyday experiences. Chiger’s father Ignacy had one goal: to keep his family safe. To that end he unashamedly employed guile and bribes; even his expert carpentry skills came in handy to construct secret spaces in which his daughter and son could hide during “liquidation actions.” When Nazis invaded Lvov’s Jewish ghetto for a final “action” in May 1943, the Chiger family and five other Jews descended into the city’s filthy sewers to hide. They were helped by a Catholic sewer worker who saw their salvation as a means of atoning for his early life as a criminal. Lively prose deftly describes the smell, the pitch-dark, the cold, the rats and the harrowing fear of being discovered by Nazis. Through it all, Ignacy Chiger’s ever-present sense of humor kept his family strong.

Captures both tragic events and beautiful images that continue to haunt the author after more than 60 years.