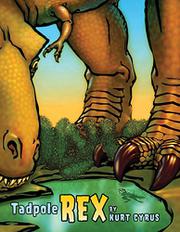 A tiny frog unleashes his inner tyrannosaur when his diet changes from plants to prey. In prehistoric times, a timid polliwog lies in the mud at the bottom of his puddle, hiding from predators. The rhyming text, fruity with primeval “bloops” and “floops,” follows his growth as he becomes a frog. And then he hides no more. In touch with his inner predator, he ribbets for all to hear, attracting the attention of the large dinosaurs: “Bouncing about with the boldest of hops, / Rex nearly tripped a triceratops.” Having taken his stand, he then quietly returns to skulk in his puddle, only his eyes visible above the surface. The swampy greens and hard edges of the digitally colored scratchboard artwork suit the prehistoric period and rough scales of the dinosaurs perfectly, while the varying scale of the illustrations will keep readers on their toes—Cyrus is a master of the extreme close-up. Readers will thrill to the action and suspense while teachers will appreciate the subtle lesson on the life cycle of frogs. (author’s note) (Picture book. 4-7)