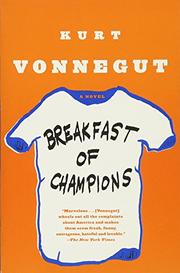 The thinking man's pop writer," apocalyptic fancifier, convinced moralist, and cheerful doomsayer has now in his fiftieth year "resolved to shun storytelling" and write about life as it reaches its extinction in this the year of our Lord or maybe the next one and via Kilgore Trout, the "only hero of our age" whom Eliot Rosewater introduced years ago, and also via one Dwayne Hoover, a Pontiac dealer whose wife had earlier eaten Drano and who now runs amok on that great Interstate which reaches from here to the void. AMEN. This then has something to do with — in fact everything to do with — the world in which we live with death and chemicals (they're the ones that have sent Dwayne Hoover on his way) and pollution and population and it follows Dwayne as he leaves Midland City through a number of Holiday Inns (they serve the Breakfast of Champions in their cocktail lounge — it's a martini by the way) and Burger Chefs all the way to West Virginia, demolished, and back to the final rampage in which Dwayne shoots up a whole hospital emergency room full of people before he's subdued by two policemen on the Median Divider. AMEN. All of this is told in Mr. Vonnegut's appropriately discontinuous fashion from deceptive non to as the crow flies sequitur and there are magic marker pictures comic-stripped in throughout the text including an AJAX truck and a mechanical beetle made by the Germans and an electric chair. Carpe diem before the day is all over and obviously a great many people will.