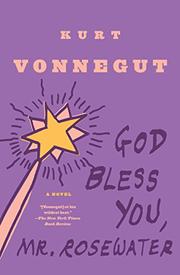 In the tradition of Joseph Heller, Bruce Jay Friedman, and Ken Kesey, this is another zany exploration of the world of the oversane. Our hero Eliot Rosewater is the son of arch-Conservative Senator Lister Ames Rosewater of Indiana, a veteran of the Second World War during which he killed a fourteen-year-old boy with a bayonet in a disastrous mishap. He is a Yale graduate, science fiction lover, booze hound, sufferer of several nervous breakdowns, one of which occurred during a performance of Aida when the hero and heroine were suffocating in an air-tight chamber ("You'll last a lot longer," Eliot shouted to them, "if you don't try to sing"), and heir to the multi-million dollar Rosewater fortune. Eliot, at 43, returns to the town in which his exploitative ancestors first made their pile, to help the poor by giving love, money, and time uncritically, "to prove that hatred of useless human beings and the cruelties we inflict on them for their own good need not be parts of human nature." By doing so, he leaves himself wide open to the legal machinations of a young schemer out to prove he's "crazy as a loon"... Vonnegut's not quite up to the three previously mentioned writers, but he is close. He hasn't made the novel form, at least this one, come to terms with his own prodigious talents.