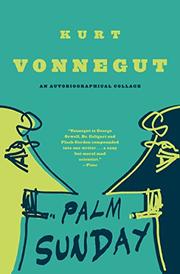 Is this "collage" of Vonnegut's occasional writings "a very great book by an American genius" (as he declares in a pretty hilarious mock-preface)? Or is it—as he goes on to suggest—a "blivit" (i.e. "two pounds of shit in a one-pound bag")? Well, it's neither, of course, and both fans and non-fans will find the Vonnegut they love or hate here. Starting out with a good strong polemic against censorship, he moves along to a moderately interesting family history—written mostly by his Uncle John, but spiced with highly Vonnegutian asides (about his grandfather: "This Albert Lieber, whose emotional faithlessness to his children destroyed the mind of my mother, along with prescribed barbiturates and alcohol, was a rich man's son"). Then come some college memories, a half-parodied "self-interview" for The Paris Review, and tributes to friends: William F. Buckley, Jr. ("I would give a million dollars to look like that"), Joseph Heller (a review of Something Happened), Irwin Shaw, Bob and Ray. And so it goes—with somewhat decreasing coherence—as Vonnegut includes Some commencement addresses; bits about his wives and children; essays on Twain, Swift, and CÃ‰line; favorite songs (C&W tunes by the Statler Brothers); the introduction to a 1976 edition of Slaughterhouse Five (re Dresden—"One way or another, I got two or three dollars for every person killed. Some business I'm in"). Plus—at his very worst—a sophomoric sf story ("The Big Space Fuck") and an even more sophomoric, campy musical version of "Dr. Jekyll and Mr. Hyde." Throughout, a few themes are repeated a lot—his freethinker beliefs, the need for extended families, the literary-academic world's phoniness—and there are one-liners and aphorisms galore. So, though Vonnegut is just about right in giving himself a "C" for this book overall (Cat 's Cradle gets A+), it's quintessential KV—wildly sentimental but hard and funny on the surface—and sure to please his fans while offering sporadic items of interest to others.