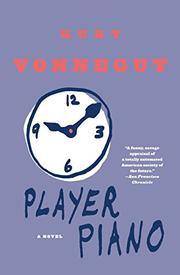 A tough, tightly written book of a brave new world to come, which in its projection offers a tantalizing problem as well as an imaginative invention reminiscent of the early Huxley. Dr. Paul Proteus, a super engineer in a super-mechanized society, finds his life lacking in significance although he is on the eve of a spectacular promotion as the manager of the Pittsburgh works. Urged on by his sterile wife, he nonetheless finds himself listening to his iconoclastic friend Finnerty. The two spend a drunken and revealing evening among the reeks and wrecks (the common people) where they meet Lasher, a self-styled preacher who converts Finnerty and jells his resolve to break the system. Dr. Proteus wavers in a divided loyalty but when the Pittsburgh job is offered him only at the price of his betrayal of Finnerty, his Protean change is completed and he joins forces with the opposition...The automatic checker player that is beaten when crossed wires overheat it, a talking helicopter, a monstrous machine with a tape recorder memory, all these absurdly ingenious machines give the book its special quality and fascination. And this new performance on the player piano of western civilization is worthy of more thoughtful attention.