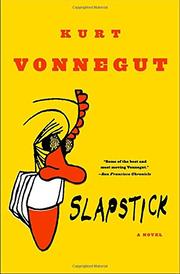 SLAPSTICK OR LONESOME NO MORE!

Plus ca change, well just what? Well, the "And so ons" and "ETCs" of Breakfast of Champions to Hi Ho, even if he was going to give up Hi Ho after about the fifth one. This is Vonnegut as you knew and loved him, or didn't, with the reductivist simplicities and more than faintly identifiable referrals and the one-pea-in-a-peapod story. As daydreamed by Kurt en route to the funeral of his uncle with his older brother (a "couple of nice old Andy Gumps"—he finessed you out of that comic strip put-down, didn't he?). The fantasy's about a crazed old pediatrician-centanarian Wilbur Daffodil-II Swain who had a twin sister Eliza and when they put their heads together they were geniuses and when they were apart they were very slow non-learners. But finally they're separated for good and Wilbur—with the help of tribenzo-Deportamils and his Lonesome No More slogan—becomes President of the US. "This is truly the work of children." Truly. But then you'll either accord it a smile or a hi-ho-hum in the bum since reactions to Vonnegut are as immiscible as oil and rosewater.