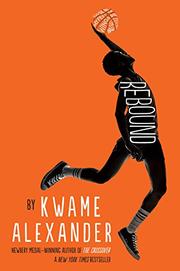 In this prequel to Newbery Award–winning The Crossover (2014), Alexander revisits previous themes and formats while exploring new ones.

For Charlie Bell, the future father of The Crossover’s Jordan and Josh, his father’s death alters his relationship with his mother and causes him to avoid what reminds him of his dad. At first, he’s just withdrawn, but after he steals from a neighbor, his mother packs a reluctant Charlie off to his grandparents near Washington, D.C., for the summer. His grandfather works part-time at a Boys and Girls Club where his cousin Roxie is a star basketball player. Despite his protests, she draws him into the game. His time with his grandparents deepens Charlie’s understanding of his father, and he begins to heal. “I feel / a little more normal, / like maybe he’s still here, / … in a / as long as I remember him / he’s still right here / in my heart / kind of way.” Once again, Alexander has given readers an African-American protagonist to cheer. He is surrounded by a strong supporting cast, especially two brilliant female characters, his friend CJ and his cousin Roxie, as well as his feisty and wise granddaddy. Music and cultural references from the late 1980s add authenticity. The novel in verse is enhanced by Anyabwile’s art, which reinforces Charlie’s love for comics.

An eminently satisfying story of family, recovery, and growing into manhood.