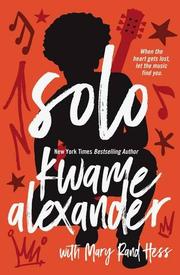 The 17-year-old son of a troubled rock star is determined to find his own way in life and love.

On the verge of adulthood, Blade Morrison wants to leave his father’s bad-boy reputation for drug-and-alcohol–induced antics and his sister’s edgy lifestyle behind. The death of his mother 10 years ago left them all without an anchor. Named for the black superhero, Blade shares his family’s connection to music but resents the paparazzi that prevent him from having an open relationship with the girl that he loves. However, there is one secret even Blade is unaware of, and when his sister reveals the truth of his heritage during a bitter fight, Blade is stunned. When he finally gains some measure of equilibrium, he decides to investigate, embarking on a search that will lead him to a small, remote village in Ghana. Along the way, he meets people with a sense of purpose, especially Joy, a young Ghanaian who helps him despite her suspicions of Americans. This rich novel in verse is full of the music that forms its core. In addition to Alexander and co-author Hess’ skilled use of language, references to classic rock songs abound. Secondary characters add texture to the story: does his girlfriend have real feelings for Blade? Is there more to his father than his inability to stay clean and sober? At the center is Blade, fully realized and achingly real in his pain and confusion.