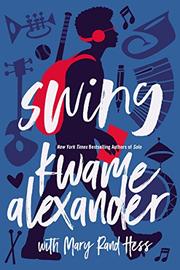 Seventeen-year-old Noah struggles with the feelings he has for Sam, a childhood friend, and is encouraged to express himself by an ebullient buddy.

Noah and his friend Walt Disney Jones, aka Swing, are linked by a love of baseball. Swing is also obsessed with jazz and tries to make Noah a devotee as well. Along with their various personal dramas—Swing’s new stepfather, the romantic advice Noah is receiving—someone has been planting American flags around town, leaving folks to speculate who and why. At a thrift store, Noah purchases a travel bag as a birthday gift for his mother and inside he finds long-hidden love letters. They encourage him to put his feelings on paper, but Swing forces his hand by anonymously giving his writing to Sam, causing a rift between them. Then, out of nowhere, everything changes, and the innocence of their lives is shattered as their friendship troubles are put into perspective by something far more serious. The free verse tells a story as complex as the classic jazz music woven throughout. Noah is the narrator, but it is Swing, with his humor, irresistible charm, and optimism, who steals the spotlight. All the secondary characters are distinctive and add texture to the narrative. Swing is African-American, while Noah is white. Despite the easy flow of verse, there is a density to this story with its multiple elements.