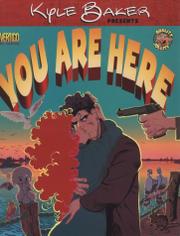 The author of Why I Hate Saturn, best known for his long-running strip “Bad Publicity” in New York magazine, attempts an “urban romantic comedy——but his disparate influences and preposterous plot suggest something altogether different. Visually, Baker brings together a noirish, hard-boiled look for his foregrounds (one bad guy looks just like Robert Mitchum in “Cape Fear—), with backgrounds that would make the animators at Disney proud—full of cute animals, pretty trees, and stunning sunsets. The two “looks” reflect the convergence of narrative lines: Noel, a former Manhattan jewel thief, has spent the past year living upstate in bliss with his trippy, sensual girl friend, an “aura cleanser” by trade, who knows nothing of his checkered past and who loves to commune with nature. When she follows Noel back to the city, she finds herself in the middle of a nasty revenge tale, resulting in the death of Noel’s buddy Oscar, who bears a striking resemblance to the father in “Bad Publicity.” Baker, no gritty realist himself, mocks the street cred of a nameless movie director (read: Tarrantino), but would better attend to his own implausibilities, though a clever epilogue almost redeems the sillier aspects of the narrative. Baker’s computer-generated backgrounds—while cinematic in style—also result in much visual murkiness: his heroine has a mush of red hair and a smudge of lips. Warts and all, though, this full-color production deserves attention for DC’s effort to entertain adults for a change.