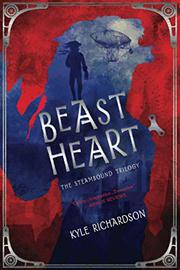 From the Steambound Trilogy series, volume 1

A girl with an amazing hand and a boy with a deadly condition collide in this YA steampunk novel by Richardson (Wild Horse, 2019), the first in a trilogy.

How’s this for steampunk: Gabby Lenton’s hand is literally made of steam due to a bizarre disorder that manifested when she was 9. Now she has to wear a clockwork glove to cover it. Gabby isn’t thrilled about the development. “I want to be normal, like everyone else,” she complains to her mother, who tells her in response, “One day…you’ll understand how special it is to be…well, special.” When her mother is murdered by a mysterious creature that breaks into their home, Gabby seeks help from Detective Shaw, who promises to help her catch the beast. As they begin to search the city’s shadowy precincts, Kemple is an orphan living in the house of an abusive foster father. He’s used to beatings and chores—enough that he’s willing to take the fall for the new girl, Josephyn, when she breaks the rules. Josephyn suggests that they escape, but once they’re out in the city, Kemple is scratched by a cat. The scratch becomes infected, and Kemple begins to get sick…begins, in fact, to change. As Gabby (rechristened Brielle) and Kemple independently drift through the city’s underworld—one seeking a cure, the other revenge—they discover that monsters are more numerous and more complex than either could have imagined. Richardson’s prose possesses the gritty urgency of urban fantasy, particularly when describing the novel’s imaginative scenery: “Pedestrians jostle against one another, as if the sidewalks have somehow become valuable property. Even the airships seem to have lost their gentle, whalelike sway—now the sky looks like a wild sea, with every dirigible behaving like a predator on the hunt.” The novel takes its time getting started, but the main characters—particularly Gabby—are likable and well drawn. Despite the steampunk setting, the story has a rather classic, almost mythic structure, which will entertain those who give themselves over to the novel’s somewhat leisurely pace. Two sequels are planned, and readers will be interested to see where Richardson goes with these two slow-cooked characters and their evocative milieu.

An accessible yet carefully composed YA novel with a steampunk setting.