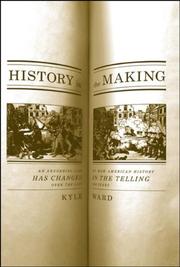 HISTORY IN THE MAKING

Excerpts from American-history textbooks from the 19th, 20th and 21st centuries trace the ways that history has been written and rewritten over time.

Insofar as they can be known, the facts of history remain constant, but each generation interprets for itself the meaning of the past, emphasizing or obscuring characters, issues and episodes to reflect the latest twitch in the sociological/political zeitgeist. Ward (History/Vincennes Univ.) here provides excerpts from a range of history textbooks, addressing topics like the American Revolution, Native-American relations, slavery and the bombing of Hiroshima and Nagasaki. (In a chapter titled “Slavery in America,” for example, the author excerpts passages from nine textbooks published from 1851 to 1995.) For the most part, he deals with well-known events (the Boston Massacre, the last stand at the Alamo) and characters (Washington, Lincoln). Other subjects—the Caroline Affair, the Battle of Horseshoe Bend, the Espionage Act—will be only dimly recalled by most. The excerpted materials are preceded by some rather thin analysis. Readers in search of a richer perspective on the subject would do better while Peter Charles Hoffer’s Past Imperfect (2004). Still, the primary sources Ward provides are a good starting point for anyone interested in history and subjectivity.