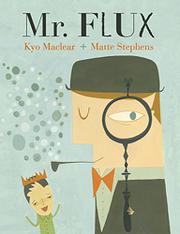 In this homage to the 20th-century art movement known as Fluxus, a boy named Martin resists the invitation of his artistic, bowler-hatted neighbor to embrace an unknown in his young life: change.

Taking his cues from the adults around him, he refuses Mr. Flux’s gift of a box of “change,” explaining that “change is upsetting, and we like things just the way they are.” But with Mr. Flux’s encouragement, Martin tries out a few new things and eventually comes to appreciate his neighbor’s fluid way of seeing art in other than the usual ways. Marcel Duchamps’ Fountain appears (on a pedestal!) on one page as an example of art that might not be recognized by people “busy making sure everything stayed the same.” Stephens’ angular, quirky and slightly abstract illustrations convey both the sense of play and the curious lenses for experience that the Fluxus movement celebrated. Maclear does not entirely avoid the pitfall of exhortation rather than inspiration, telling readers that changes take place in Martin’s life and neighborhood and stating that the “most surprising change was in people’s thinking” without further explanation.

Nevertheless, this is a friendly introduction to a lighthearted aesthetic and an antidote to the belief that standards (in art or anything else) are fixed or immutable.