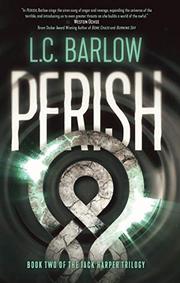 In Barlow’s thriller sequel, 18-year-old Jack Harper attempts to break free from a tragic past, until she hears the siren’s song of revenge.

As this installment opens, Jack watches a mansion burn. She’s destroyed the headquarters of the Infinitum cult run by her father, Cyrus. Lutin, a supernatural being known as a ferric, gave her the power to resurrect the dead, but has now vanished from her life. Jack drives Cyrus’ car from Basille, Louisiana, to New York City to “build my life, one brick at a time.” Initially, the stimulating metropolis invigorates her. Then she sees that Cyrus’ downfall—and the location of the car she stole—have made the news. She eventually settles into a routine of robbing people in Central Park so she can afford an apartment under the alias Sarah Anderson. She’s shocked when she starts receiving letters from children from around the country who are still trapped in the cult’s network; somehow, her precautions have come to naught, and Jack realizes that her attempt at a new life is a fantasy. As she attempts to retreat into drug use, she meets Patrick Flannigan, a princely party animal who turns out to be the target of a criminal syndicate; his father owns the mysterious Lucient Laboratories, which may have a connection to Jack’s past. Barlow’s remarkable sequel keeps the tension high, and the twists consistently feel fresh and unexpected. Jonathon Roth, later introduced as the leader of the criminal Outfit organization, proves a compelling foil for Jack. The protagonist’s quest for self-possession is never eclipsed by the supernatural pyrotechnics, although the action scenes are remarkably cinematic: “Blood exploded from beneath his right cheekbone. Teeth flew out of his mouth to rattle off the windshield.” The final third consists of carefully arranged surprises, each adding psychological complexity to the story—and hints that the next volume will be even grander.

A tight series installment that thrives on narrative risk.