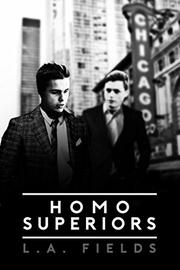 The author recasts one of the most infamous cases of the 20th century and brings it into the modern era, replacing the deluded Chicago-based killers Nathan Leopold and Richard Loeb of the 1920s with present-day alter egos Noah Kaplan and Ray Klein. Noah is a shy, brainy 18-year-old, nervous about his sexuality and mad for bird-watching. His classmate Ray, a budding sociopath, idolizes Friedrich Nietzsche and dreams of becoming an Übermensch, or superior man: “we’d be seeing colors we don’t even know are around us, understanding time the way it really is, and not this day/night/harvest season animalistic calculating we’ve been doing so far,” he tells Noah. Ray, though heterosexual, accommodates Noah’s crush on him in exchange for Noah’s collaboration in some very bad ideas: “Ray could be a bit of a user. Noah knew that, and knew that he liked being used by Ray because it netted him more time in the boy’s presence.” Ray soon drags Noah along for excursions into theft, arson, and, eventually, murder. The real-life Leopold and Loeb confessed to choosing a 14-year-old boy, taking him off the street into their car, and laboriously chiseling his head apart. Fields has done her research: her own book ends abruptly with Ray and Noah cruising through their own Chicago neighborhood, armed with “a heavy chisel with the blade taped up for bludgeoning.” It was a wise move on the author’s part to end her novel just at the moment when no amount of work could make readers feel sympathy toward poor, misguided Noah. As it stands, however, she’s acquitted herself as a modern-day Clarence Darrow, creating as compelling a brief for the defense as Noah Kaplan (or Nathan Leopold) could possibly hope to have. She writes so arrestingly of thwarted desire and social awkwardness that readers may briefly believe themselves to be inside Noah’s own skin. Overall, it’s a thoroughly unsettling book.

A well-researched reimagining of what was once called “the crime of the century.”