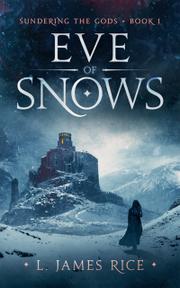 Sundering the Gods Book One

In Rice’s fantasy series launch, an island ruled by seven clans faces body-possessing demons and a threat of a Holy War.

Eliles is a postulant at Istinjoln Monastery on the island of Kaludor. She’s spent years keeping mum about her feral magic (an ability to generate fire); the Church would likely deem it a defilement and torture her to death. She plans to leave the monastery but first learns one of her friends has been killed by the Colok, big, bearlike creatures. Oddly, high priest Woxlin is fascinated by a scroll strapped to the victim. When Eliles manages to get eyes on the scroll’s message, she realizes that some in Kaludor are worried about beings called the Shadows. Ivin Choerkin of the Choerkin clan, meanwhile, checks on a cave-in at the clan’s Ihomjo mines, which left miners trapped. He finds signs of a Colok attack but also evidence of Shadows from the Stone, noncorporeal demons that possess humans. As Eliles, Ivin, and others soon learn, the Shadows are a part of a much bigger plan—all someone’s bid for power. The plan ultimately puts everyone in danger of a potential Holy War, which would surely leave the island in ruins. Though the novel is dense in plot and characters, debut novelist Rice maintains a surprisingly sharp focus. An unhurried pace, for example, allows for clearly defined characters, despite their abundance. The narrative likewise zeros in on recent events, while the Great Forgetting keeps the larger backstory murky (gods stole mortals’ memories of the past). Rich descriptions assume medieval attributes: “A drawbridge of oaken planks stretched across a twenty-foot chasm, leading into a gatehouse with three iron portcullises and murder holes above.” The final act boosts the action, introduces menaces, and involves a few shocking revelations. The tale moreover has a definitive conclusion, while making it clear that further volumes await.

Brimming with well-defined details and characters; augmented by bountiful enthusiasm and spirit.