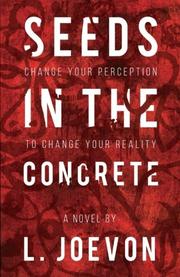 SEEDS IN THE CONCRETE

Debut author Joevon presents an urban novel about an aspiring songwriter’s quest to transcend his surroundings.

When the reader first meets Lance Adams, he’s not happy. Lance wrote a smash song for the rapper J-Money and, although Lance received $10,000 for his efforts, he feels he deserves more (“He’s making MILLIONS off of my LIFE!”). As the reader learns, Lance’s life certainly makes for good hip-hop copy. He grew up in the Marcus Garvey Projects in Brooklyn surrounded by drug abuse and violence. He spent three years in prison and is quick to throw a punch. Now that he’s a free man, he dreams of making music and spends long hours at Barnes & Noble writing lyrics. At the bookstore, he meets the thoughtful Ayana, and they eventually have a son together. Lance looks to be on the right path, but his old troubles haunt him. His is a world where slighting the wrong person can end poorly, and drugs can drain resources and end lives in a flash. Lance points out the stupidity of stealing an iPhone, saying that the $700 phone isn’t worth the risk: “A crackhead can smoke that away in ten seconds!” Halfway through the story, following an incident with a gun, Lance enters a strange realm where he is taught various life lessons. He emerges as someone who has journeyed to the recesses of his own mind. He also emerges as a very different person. The excitement for the reader comes in finding out how Lance will succeed now that he is both physically and mentally changed. And there is plenty of excitement to be had: bullets fly, egos collide, and music is made even if the storyline sometimes sags with mundane details, including Polonius-like advice Lance gives his young son about borrowing money. The reader need not know so many specifics, but the payoff is with the protagonist. Lance is often down but will he ever be out? It’s a question that keeps the story moving until the very end.

The novel hobbles itself with excessive details, but Lance’s journey is a lively, satisfying one.