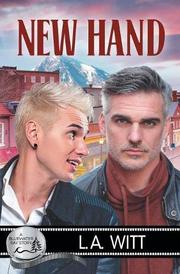 In his first year alone, a handsome widower begins a May-December romance with an adorable boyfriend in the latest installment of the Bluewater Bay series.

After his husband’s death, 40-something Garrett Blaine quits his accounting job, moves from Seattle to the small town of Bluewater Bay, and takes up bartending at a local pub. There, he finds 20-something Jesse Brooks drinking soda by himself after his date stands him up. It’s not the first time Jesse has been in this position—he’s HIV-positive, and not everyone he’s dated has been cool with that. But Garrett is different. He’s older, wiser, and no stranger to illness thanks to his late husband. He even likes video games and comics, which is great for Jesse, who works at a comic book store. Rather than a tear-jerker, this is the story of a functional relationship with a few extra kinks. The first half of the book is almost too light on tension, as the two men hit it off from their first meeting, but the second half gets to the heart of the conflict—caring for a sick person is devastating, and every time Jesse so much as coughs, Garrett flashes back to the last helpless moments of his husband’s short life. Thoughtless comments from friends and family members also make Garrett wonder if this new relationship is happening “too soon” and, worse, that Jesse is too much like his late husband. Told in alternating perspectives, the narrative shifts seamlessly and evenly between Jesse and Garrett, like two men expertly passing the baton in the relay race of love. Jesse is lively and bold, while Garrett is reserved but sympathetic and caring, and together they generate plenty of heat. The revelation in the final chapter makes the story well worth reading to the end.

Mark this one on your calendar.