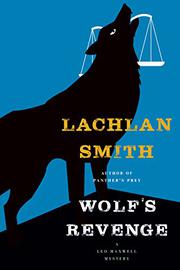 Smith, hot in contention for whatever award is given for the multivolume mystery series that sounds more and more like installments in a single endless story, puts his hero, San Francisco attorney Leo Maxwell, through a fifth round in the wringer.

Just because Leo’s client Bo Wilder, a homicidal gang leader, is serving a life sentence doesn’t mean he can’t still wreak havoc on Leo and his family, as he does when he arranges for Jack Sims, an underling with a serious appetite for more power, to snatch Carly, the daughter of Leo’s brain-damaged brother, Teddy, from a baseball game and smilingly return her a few minutes later. It’s instantly clear that Wilder wants something from Leo—in this case, his legal services on behalf of the Jane Doe several witnesses saw shoot Aryan Brotherhood stalwart Randolph Edwards on a Tenderloin street—but Leo realizes only gradually that he and Teddy and their father, Lawrence, whose fraught encounters with every side of the law have already put his sons permanently on their toes, have, without doing anything new, stepped into the middle of a war whose participants range from the Aryan Brotherhood to the FBI. Since Smith has already shown that he’s not shy about killing off Leo’s nearest and dearest (Panther’s Prey, 2016, etc.), Leo can only oscillate between preparing his impossible defense of Alice Ward, whose mother was murdered a week after a 1999 restaurant robbery that probably involved her neighbors Sims and Edwards as well, and savoring the irony of the Brotherhood paying for the defense of an African-American accused of murdering one of their number, all while he waits to get the next telephone call informing him that it’s time to call the mortician he must keep on speed dial.

Though Smith conscientiously provides a good deal of back story explaining what’s at stake for the hero and his family, this series is getting harder and harder to plunge into the middle of. Fans are advised to start from the beginning (Bear Is Broken, 2013) and take it from there.